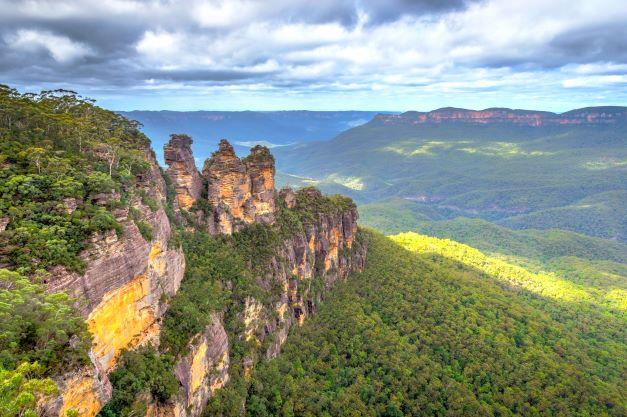 More than 280,000 square kilometres of Australia, is made up of protected National Parkland. These parks cover a variety of landscapes, from red deserts, to alpine peaks and ancient tropical rainforests.

With so much to see and do in these scenic fragments of wilderness, travelling by campervan will provide the perfect way to appreciate nature up close. A campervan hire also provides freedom and flexibility in your itinerary, allowing you to spend as little or much time in each place as suits you.

Having so many choices in wildlife and wilderness escapes in Australia, is a great problem to have! If you need some help narrowing down your next road trip adventure, here is a list of 7 best Australian National Parks to visit in a campervan.

This gem is so close to Sydney that you can be there in just an hour and a half.

Sights inside the park include one of Australia’s most iconic natural landmarks, the three sisters rock formation. There are many breath-taking views to be seen throughout the Blue Mountains, which is facilitated by the wonderful lookout points that are accessible to visitors.

Waterfall chasers will be enchanted by the many magical wonders to explore, such as Katoomba Falls, Wentworth Falls, Bridal Veil Falls and Leura Cascades.

There are multiple campgrounds available in and nearby the Blue Mountains, and if you wish to stay directly in the National Park itself, you can book online at least two days in advance.

This huge National Park in Australia’s island state, is not only stunningly scenic, but also very organised.

Each day, there is a shuttle service operating, that takes you up and down the mountain and allowing you to get off and on at your chosen stops.

The available walking trails range from twenty minutes to several days, and include scenic waterfalls, reflective lakes, and snowy mountain peaks. There are suitable options for all fitness levels.

If you love wildlife, then you will be delighted by the local wombats roaming the grasslands, or the shy pademelons that hide in the brush.

There is a Big4 park less than five minutes’ drive from the National Park’s visitor centre, a perfect base to explore this fantastic Alpine wilderness.

This World Heritage listed National Park is of great ecological significance, due to its ancient rainforest that existed in prehistoric times.

With such a long history, the irreplaceable environment provides habitat to a wealth of unique flora and fauna. There are over 160 species of birds living in this rainforest, as well as sugar gliders, bats, flying foxes, wallabies and potoroos.

There are walking trails available to assist your explorations of the park, and its many attractions – like Moran’s Falls at Python Lookout, or the ancient Hoop Pine trees along the Caves track.

If you prefer remote beaches with less tourists, then you will love Innes National Park in South Australia’s Yorke Peninsula.

It has magnificent views of the ocean, a variety of walks and hikes, and historic lighthouses to visit. The sparkling water and white beaches are pristine, and provide a great spot to snorkel the clear rockpools that are brimming with marine life.

Spend an afternoon watching the sunset from the Pondalowie Cliffs, with its colourful rocks and craggy texture, the location feels otherworldly.

Emus, Kangaroos and Pelicans are abundant, and you are almost guaranteed a sighting or close encounter. Ethel Wreck is often visible from Ethel Beach, a ship that was built in 1876, but which ran aground here in 1904, during a severe storm.

Many visitors to Kakadu come to experience the world’s oldest living culture. A sacred region to Indigenous Australians, the park is home to ancient Aboriginal rock art, ceremonial sites and burial grounds.

A great place to learn about the Northern Territory wilderness, you will discover multiple billabongs, waterfalls and gorges to explore. Day cruises are available too, allowing you to experience the freshwater wildlife, such as crocodiles and ducks, as well as the eagles that soar overhead in this area.

If you haven’t rented a 4WD campervan, then you can join a tour to reach places inside the park that are harder to get to.

The park has a variety of landscapes, including rugged coastal clifftops, white sandy beaches, lush fern gullies and cascading waterfalls. There is a variety of tracks to follow, allowing you to easily see enjoy the many natural wonders.

A highlight of the Great Otway is the Californian Redwood Forest, which was planted here around ninety years ago. Originally established for the logging industry, these 1930’s trees create a fairy tale ambience. Currently, they stand at approximately 70 meters tall but are expected to reach 100 meters when fully mature in several hundred years.

There aren’t a lot of places where you can spot kangaroos sunbathing on the beach, but it is often seen at Cape Le Grand National Park. The remote bushland directly meets the soft sand of the coastline here, making it the ultimate nature retreat.

The pristine water provides a crystal-clear snorkelling opportunity, with views out to the Recherché Archipelago, a series of small islands that sit off the shore here.

Filled with secluded bays, hiking opportunities, and abundant plants and wildlife, this National Park is a dream location for adventurers and holidaymakers alike.